Thumbs up for all those living abroad, who labored day and night, working ass off, spending many sleepless nights at terrible temperatures, homeless in a home away from home, have risked their lives just to survive in the “promised land”. In the mist of this, have sent money back home to invest, and to build but in the end have been terribly disappointed by loved ones ( Hmm! Sober, chin drops, eyes moistened with tears!).

…homeless in a home away from home

You are sleeping and snoring, he is running shuttle from shift to shift with few hours of sleep. Back home they had thought that the promised land was actually flowing with milk and honey. But now no one knows the stories more than he that has crossed many rivers and seas, and flown high and above, to get to the coveted destination of an average Nigerian. Yes, the milk and honey no longer flows freely – you fight furiously to get it, sometimes at the expense of your health, and life!

But they will never believe the life they live in the “promised land”. Hustle and struggle with trouble, pain and gain in disdain. Are you wondering? Stop! This is the life they live. Scarcity in surplus, just to send money back home, and build. So that when they do come back home to rest and recuperate, to enjoy the surplus in scarcity.

…hustle and struggle with trouble

…pain and gain with disdain

(Curtain falls, writer is hungry, to be continued shortly)

John is quite experienced and didn’t want to waste funds. He told his brother, Mark, back home to get a good architect and building contractor in Benin City. But what did his brother do? Hmm (shakes head), It’s going to shock you my friend.

Mark felt he was smart ( Mark Smart, what a sound!). He took the building plan to a building contractor he could control like puppet, and work began.

Meanwhile, John had a particular design specification which Mark and the contractor could not comprehend. Construction went on nonetheless. After 4 months the building had gotten to the window level.

At this point, John decided to pay a surprise visit. The bubble was about to burst. The truth was about to come to light. When Mark saw his brother, he was frightened and fidgeting. Mark was a fluent speaker, but now he became a stutterer.

Mark: “um, um, good afternoon, you are around? You didn’t tell me you were coming”

John: “I just rushed to the country for a particular business, would be going back soon. But I would like to catch sight of my project”

Mark soon exhausted all his excuses not to go to the site. In fact, the sight of his brother caused a sigh, and made him afraid of the site. So they began the journey to the site. They got to a point, the car couldn’t drive through because of the terrible nature of the road.

They had to trek the remaining distance on foot for 15mins. Now let’s not talk about John’s mood at this point. What do you think? Someone from abroad to undertake a journey like this, hmm. The storm is gathering gradually.

“This is the building”,  said Mark.

“What!”, John explodes in anger

John’s anger was turned into tears. Men don’t cry, people always say. But this time John broke down in tears. You could see the tears flowing out freely like a stream that burst out from a pipe! The thoughts in his head became like bubbles colliding with each other at great speed.

Mark had told him he bought a land for him in a very developed area in Benin City. He was also told that the building was 90 percent completed. But alas, it’s a different thing altogether.

Two days later, John left the country without saying goodbye and vowed never to send money for that project again. And even decided to sell it off. So, he searched online for the best estate agent in Benin City to facilitate the sale.

Oh, what a pity! The goose that laid the golden egg had been chased away from home.

My dear friend, do you think John would ever contact his brother again to handle his projects? You guessed right.

His relationship with his family had been damaged just because he decided to build. What an abysmal dismal situation!

However, John never gave up his dream of building a nice 3bedroom bungalow in Benin City. Again, he searched online for the best building contractor in Benin City, that will design and build.

The construction company in Benin City which he located online are rated the best building contractors in Benin City because of their good track records, attention to details, focus on the building plan and project, willingness to go extra mile, and customer focused. They give clients free orientation and consultation. In fact, they guide the client all the way from scratch to the finish of the project. To them, every client is a happy client and of course this is their ultimate goal, customer satisfaction, a top priority.

So after interacting with Mr John regarding his 3 bedroom bungalow, they sent him this 3bedroom building plan or house plan.

John couldn’t comprehend the details in the drawing. Architects have terms and units of measurement which may be difficult for the ordinary man in the street to understand. In other to be on the same page, the construction company had to use layman’s language to describe the sizes of the different sections in the 3bedroom floor plan. Most people use feet as the only understandable unit of measurement – and that was what was used to describe the size of the sitting room, bedrooms and other areas.

After this explanation, you could see John nodding in satisfaction and approval. He realized that only a professional building contractor with good track records would be willing to go extra mile.

HOW TO INTERPRETE BUILDING PLANS

Mr John didn’t want to make any mistakes. He had searched before 3bedroom flat plan drawing in Nigeria and also 3bedroom flat plan on half plot in Nigeria. He got some results but he didn’t understand it at all. He also looked for 3bedroom house designs pictures in Nigeria online. But all of this required some explanation.  Only a good architect  could draw in all details, and explain 3bedroom bungalow designs.

Why is number 1 in the floor plan repeated?

Now go back to the 3bedroom floor plan design. Are you wondering what 2 represents? Relax! The 2 is a tag for window type, size and position in the master bedrooms.

The cost for each of them can also be stated. This will enable you monitor your expenses on the 3bedroom bungalow house. Interestingly with this step by step explanation of the plan, you can actually determine the cost of building a 3bedroom bungalow in Nigeria.

Right from the floor plan, it is possible to plan out the arrangement of furniture in the design. That’s what makes it a nice 3bedroom home design. Even all the electrical connections, types, cost, etc are captured in a detailed drawing. You can actually request for this.

DREAM IT, DESIRE IT, WE DESIGN IT

Now take a look at the 3D design of modern 3bedroom bungalow below. It brings out every part of your 3bedroom bungalow in vivid reality. What you desire you can acquire in the design. It’s so real, my brother. 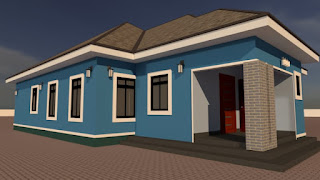 … What you desire you can acquire in the design

That’s not all. Look at the 3D interior design of the sitting room. Wow, such a fantasy! This shows that  your interior design can also be planned out right from the beginning. Oh yes, you heard me right. This provides a strong mental picture of the finished 3bedroom bungalow. 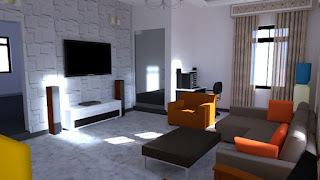 Did you also know that you can request for the 3D video of your 3bedroom bungalow design? Here you see the bungalow in different positions: aerial view, side view, back view, and all the interior rooms of the bungalow.

And you know what?

You determination and desire to complete the 3bedroom bungalow is revved up. Congratulations!

Where investors are rushing to buy properties in Benin City

Posted by CHIDI RUTHERFORD at 09:03
Email ThisBlogThis!Share to TwitterShare to FacebookShare to Pinterest