IS YOUR LAND SECURED?

Many of us would like to answer yes. It never sounds nice to think 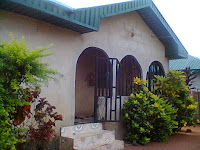 that your land is under threat. True, you worked hard to raise money to acquire the land. Hence, you would do anything to protect it from intruders. However, you may not be able to control all the factors that might undermine the security of your land.

Consider this experience:
Martins was protecting a particular land. He scares away anyone attempting to invade it. For the time been, the land was protected. Meanwhile, the owner of the land had been away for a long time and didn’t bother to visit, probably because he knew someone was on the look out for him. Because of the strategic location of the land, a lot of persons have made attempt to sell it but failed. Then it occurred to one of them to bribe Martins. Martins fell for it, collected the money and kept his mouth shot. He didn’t raise any alarm as a community leader sold the land.


The buyer started work on the plot and the project progressed rapidly. The building soon reached roofing level. Out of the blues, the genuine owner of the land emerged and couldn’t believe his eyes. He had no moral justification to scold Martins for not alerting him to the development since Martins was not under strict obligation to protect the land. Besides, Martins acted as a surveillance over the land out of the goodness of his heart. To settle the matter, he had to be resettled.

THE LESSON
1.      Obligate somebody, maybe a neighbor, to watch over your land
2.      Check on your land frequently
3.      Have multiple persons to keep an eye over the land and give you a tip off once there is an intruder.
call 07054107283 or 07031384722 for a consultation
YOU MAY ALSO LIKE
How to secure your land against intruders
The real reason why some community leaders resell your land to another person
A family torn-apart over property issues

Posted by CHIDI RUTHERFORD at 00:14