Identifying the real owner of a property is the major task of the agent. This is difficult sometimes, but it is worth the effort to avoid trouble.

Some months back I had a nasty experience which I remember only because of the lessons to avoid future occurrence.A fellow agent called to inform me about a property for sale. I went there to inspect it and started marketing it. I was told by my source that the property was inherited by the first born of the family. I asked if all the family members were aware of the sale and I got a positive reply. The entire property was on 100 x 100ft but selling the 50 x 100 inherited.
In time I got a buyer. I requested for the documents. While I was taking the documents to the buyer I saw the seller going to meet her mother in her shop. I got a subtle urge to meet the mother and verify the true status of the property but disregarded the need to do so. 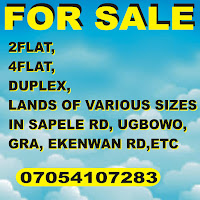 Transaction went on smoothly and all the agents smiled happily home. Then the call came two days after. A concerned colleague informed me that the property we sold had already been bought by another person the previous month. He mentioned the name of the first buyer and gave other details. This sent a chill down my spine!

Now drama unfolds! When Mr. Godfrey heard that his property had been resold he called the two-time seller(Raymond). Raymond went to his house and immediately brought out the balance N50,000 that was left for the property transaction between them. Mr. Godfrey had paid N750K, but had collected the relevant Deed of Transfer and photocopy of the Oba Approval.

It was while Raymond arrived at  Mr. Godfrey’s house that we were called. This confirmed the story that we had been fooled. It became bitterly obvious that the brother to the seller signed as witness to the seller in both transactions. What a complicated situation. Raymond’s mother was also  invited. When she arrived she was utterly dismayed  that her son resold the property to another person.
(Note: one title document covers the entire plot, seller retains the original even if he transfers part of the plot to another person. The downside is that he can use same document to resell the plot. He can only relinquish the original document if you are buying the entire 100 x 100. That was the situation)

To cut long story short, Mr. Godfrey, in his kind consideration, asked for a refund of his money. But on the condition that we top up the amount since the property, in his opinion, has appreciated a little. Based on this, he would release all the documents as well as video recording in his possession. Sadly, the agents needed to cough out certain amounts.

There was delay, other agents refused to cooperate to bring back part of their commission to the table. Along the line, I got so uncomfortable about the lingering situation. Then I and one of the respected agents raised money to give to Mr. Godfrey and thus collected the necessary documents and video recording in his possession and handed them to our buyer. We also introduced our buyer to Raymond’s mother as the new owner of the said property.

Just three days after, we got a call that Mr. Godfrey had passed on. We were terribly surprised! Then we started to look back. What kind of trouble would have brewed had we not taken the necessary steps before the tragedy? Your guess is as good as mine.
Here is a shocking follow-up to the above experience, go to "How a Family Resold a Property"

LESSONS
Please drop your feedback so that we can learn from each other and not fall prey to scammers.

ALSO READ
5 Questions to ask to fish out fake sellers

12 Reasons to invest in properties

How to know a property under dispute at a glance

How to obtain NHF Loan
Posted by CHIDI RUTHERFORD at 11:57